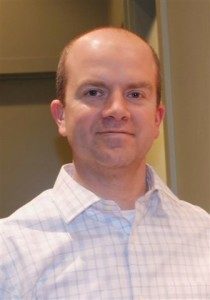 Dr Collins returned to Calgary in 1994 after experiencing the earthquakes and riots in Los Angeles. He currently lives in Calgary with his wife Sara and two sons Jake and Evan.

Dr. Collins specializes in numerous adjusting techniques. He utilizes many different Chiropractic techniques in treating patients for a wide variety of conditions.

He prefers the gentle techniques with effective results. “The more relaxed a patient is for a treatment the easier it is and more effective for the patient.”

Dr. Collins has also given talks to businesses and groups on injury prevention. 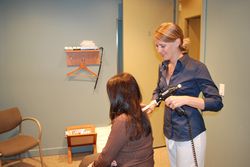 Dr. Elaine Byrtus joined Dr John Collins, at Bankers Hall Chiropractic Clinic, as an associate chiropractor, in the spring of 2008.

Dr. Byrtus graduated from the Canadian Memorial Chiropractic College in 2000 at which time she moved to Costa Rica and opened the first Chiropractic Clinic in Liberia.

In 2002 Dr. Byrtus moved to the Cayman Islands and worked out of the Chrissie Thomlinson Memorial Hospital’s rehab unit. There she worked closely with the pre-natal health care workers as well as the maternity ward until she opened her own clinic privately.

Giving the body the ability to heal, and not just cover up its symptoms, is the basic premise that drew Dr. Byrtus to chiropractic.

Conservative management of physical injuries decreases your risks, and lets your body heal naturally to its optimal potential. Dr. Byrtus is dedicated to helping people, both young and old, realize their health potential.

Find us on the map